Menu
School is now open! Welcome back we hope you have had a lovely summer break.
E Contact Details A
J Noticeboard A

A History of St. Johns

A Sketch of St John's

The History of St. John the Baptist RC Primary School in Padiham

Our school is the oldest school in Padiham to still be used as it was originally intended.

The memorial stone was laid in October 1888.

Father Mussley of Rochdale was the architect and founder. It was built for 400 pupils at a cost of £600.

Previously pupils had attended the ‘Old’ school in the chapel but the numbers were increasing     rapidly so a new school was needed.

The new building was intended to be used for the higher classes while the infants stayed in the chapel.

The laying of the memorial stone was a grand    affair as a procession of around 300 people walked along Hapton Road, Green lane, Burnley Road, and the retuned to the school via Station Road. At the front was a brass Band and a large double polled banner with father Jones leading the procession. As the foundation stone was laid, prayers were read and incense burned. The school was officially opened on May 26th 1889. 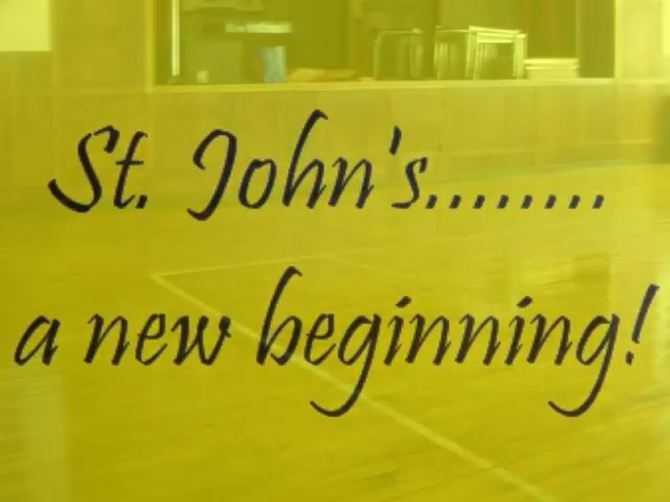 In The summer of 2010 major renovation work began on the main school hall and stage area. We wanted to keep some of the stained glass windows as these were part of the history of the school and the Church. These were sent away to be encased in PVC. This meant that the school had to operate without a school hall for around 16 weeks. Assemblies and even the Christmas play was held in St John's Church. Everyone was delighted with the finished product.
At the same time of this major work additional work was carried out in the classrooms with all the wiring being upgraded a brand new server installed and the interactive whiteboards were replaced with Interactive TV's.

On Friday 24th October 2014, workmen arrived to redecorate the art store room in school.  It was only when the room was emptied that the back of the art room door could be seen clearly.

It became apparent that in the past, we have had quite a few VANDALS in our school when they were pupils, especially from the 1960's!  We were quite shocked to see so many familiar names inscribed on the back of the door, including one of a certain GILL STOCKTON.  This person went on to marry a Mr. Byrom and is currently teaching at this establishment.  We hope that these children who recognise their names on the back of the door are ashamed of themselves and have gone on to greater things than vandalism!

Some of the photos aren't too clear due to the age of the writing and the fact that the teacher photographing them was too busy laughing at the door which we would like to keep unpainted for posterity!